Why wait for the ApplePhone? Get myBlu today! 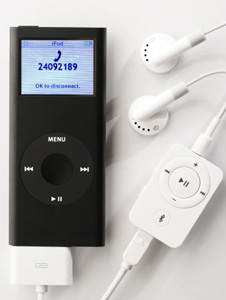 When Apple is still working on their phone and all the fanboys are arguing about the validity of their rumor sources, there’s one thing you can buy to avoid all that nuisance and waiting. British company Mavizen has started selling the myBlu adapter that connects your iPod with your phone. myBlu is essentially a wired iPod remote with a mic that also acts as a headset, to set up, simply connect it with your phone via Bluetooth 2.0 and your iPod with the wire (duh). When a call comes in, the iPod music will be paused, the caller details will be displayed on the iPod screen, and you can accept or reject the call with the buttons on myBlu. When you are done with the call, iPod music will be resumed. Users can also choose from a list of 9 most recently received or dialed numbers off the iPod with the clickwheel and start a new call. The myBlu feeds power from the iPod so it does not require any extra batteries, it is also an FM receiver that can store up to 15 radio stations. Mavizen said that the myBlu supports the iPod mini, 1st and 2nd generations of iPod Nano, as well as 4-5th generation iPod (photo). The myBlu is currently selling in Hong Kong for $76, some people claimed that these can also be found in downtown London. — Sam Chan