Whose Twitter Followers Are More Stupid? Stupid Fight Has the Answer 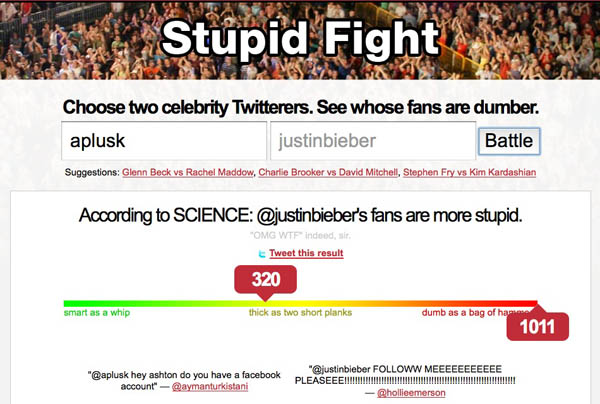 While the answer is likely very clear on whether the followers of the CERN or followers of Justin Bieber are, in general, smarter, what about a comparison that’s slightly more oblique. Let’s say, Justin Bieber followers vs Ashton Kutcher followers.  Stupid Fight is a web app which tells you exactly which group of followers is more stupid. But how exactly do they make this judgement?

It estimates based on several stupid indicators. Are they using twenty exclamation marks in a row? Do they endlessly use the abbreviation ‘OMG’? Do they seem incapable of working out where their Shift key is? These indicators have a strong correlation with the message, and its sender, being stupid.

I hope spelling plays a factor in there somewhere too. Nothing worse then a tweet with more exclamation marks then correctly spelled words. Basically, if your followers need a sign reminding them not to tweet during a fire, they are probably more stupid then other people’s followers.