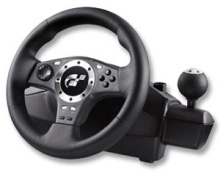 According to Sony, the dream of actually having force-feedback in driving games will never come to full bloom. Partial bloom won’t happen either. So why will force-feedback never arise? It’s all to blame on that damn Sixaxis controller which does not have a rumble function.

While this quotation does give a slight explanation, developers should still have the ability to code the force-feedback into their games, even if the SIXAXIS wouldn’t be able to use the code. For all of you who don’t know what force-feedback is, just think about driving through clouds. Now on your screen is you driving into a wall. There is no real physical difference in the real world without force-feedback steering wheels. If force-feedback is present, you will know that you drove into that wall because a motor in the wheel jolted the wheel. — Nik Gomez

No Force Feedback For PS3 Racing Wheels Either [Kotaku]