There has been a little bit of an online uprising following YouTube’s joining up with Google+ for identity authentication and commenting which has opened the way for anonymous video sharing on the web. 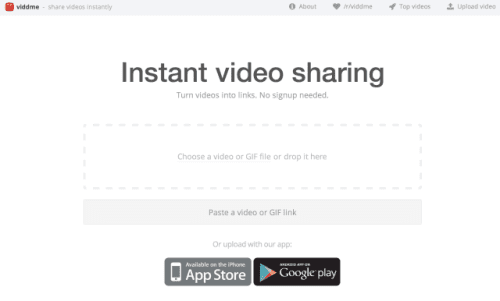 Viddme, a new video sharing service online has already seen some 140,000 uniques over the last four weeks that it has been live. Founded by Bit Kitchen, the Viddme application has been a popular one among the Reddit crowd where Bit Kitchen has focused their marketing efforts.

The Viddme campaign was built largely off the idea of IMGUR which allows the anonymous sharing of photographs, only Viddme focuses on videos rather than photographs. Viddme allows users to drag and drop videos to upload them via the web, Android or iOS or users can also utilize smartphones and tablets to upload with just a few taps instead. But what’s the big deal about anonymous sharing? Well, anonymous sharing means that users don’t have to spend time to set up an account before they share their video content.

Once users have uploaded their videos, they can share by social networks, Reddit or simply copy the link to share the video anywhere else! But does not having an account mean that you will lose access to videos once they have been uploaded? No. According to Viddme, once you upload videos, Viddme will be able to associate your phone with videos that you have uploaded so that if you decide to pull down your videos in the future you will be able to. Does this mean that Viddme won’t ever introduce an account option? No, there are rumors that this is being considered as an optional feature.

Viddme does not currently feature many restrictions as far as what can’t be uploaded in terms of content or content length but we have a suspicion that soon enough at least some restrictions will be put in place to prevent complete abuse of the new video sharing forum.