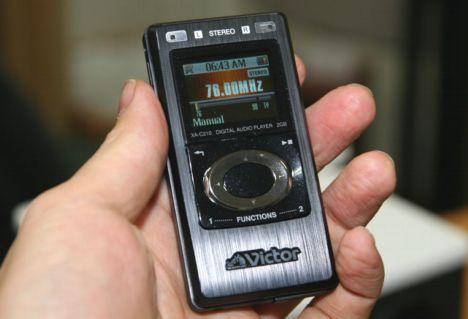 Just when we think the digital audio player (DAP) market is saturated, Victor updated their Alneo C-series audio players. They added in the K2 Technology which is supposed to extrapolate digital data to increase sound quality lost during compression. What’s unusual is that they can record sounds with 2 channels (stereo) in PCM and WMA formats; however we really doubt the difference as the 2 microphones are placed so closely together. On top of stereo recording, these DAPs also support USB streaming of WMA-DRM music, this is different from the usual iTrip or bluetooth because USB streaming will be of a much higher quality (digital vs analogue and digital vs digital recompressed). With these new features, their sizes are still kept small (86x44x11.7mm 49g). These players will support MP3, WAV and AAC files, a FM tuner is also built in. Victor claims that the battery can last for 19.5 hours, charging can be done via USB or AC. The new C-series will come in 2GB, 1GB and 512Mb (white, black, silver) models priced between $200 to $300, expect to find them in Japan early February. — Sam Chan