3G is dead… well, okay. It’s not “dead,” but it’s definitely showing its age. All four (for the moment, anyways) major carriers have rolled out their 4G networks in spots across the country, with more being added almost all the time. For people wanting to join a network and hop on the 4G bandwagon, understanding which network to get on board with is key. With that in mind, RootMetrics ran a series of tests to see which carrier had the fastest network.

The winner? Verizon — by a long shot.

Testing was done across all networks using a 4G-enabled smartphone from each. Further evening the playing field was the selection of phone: HTC phones were used on three of the four carriers, while the Galaxy S was used on T-Mobile. Here are the results of the download/upload speeds of each major carrier: 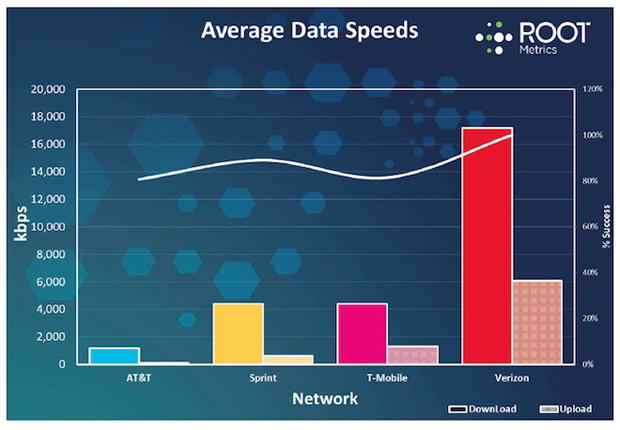 In short, Verizon crushes everybody. In fact, Verizon’s upload speeds are 37% faster than Sprint and T-Mobile’s download speeds, while AT&T is left in the dust. The download speeds need not be discussed, as the image plainly speaks for itself.

Another speed test used the SpeedTest website and tested the WiFi hotspot modes for both the HTC Thunderbolt (Verizon) and HTC Inspire (AT&T). The results were more or less the same, with Verizon scoring 8.85 Mbps on the download and 3.68 Mbps on uploads. AT&T? 2.16 Mbps down, 0.16 up.