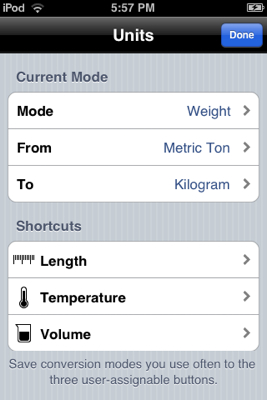 Wu Tang Clan rapper and drug expert Ghostface Killah once rapped that “all around the world today the kilo is the measure, a kilo is a thousand grams easy to remember.” That may be true, drug dealers also have to work with many other units of measurement like ounces, which weigh in at a much less memorable 28.35 grams. Thankfully, now there’s Units, an iPhone app which makes selling illegal drugs easier than ever.

Units, which is currently the third most popular iPhone app, is a simple calculator that allows users to convert between different units of measurement right on their phones. Units can convert between grams, ounces, pounds, and kilos making it an awesome app for drug dealers with rusty math skills. Best of all, Units also comes with a currency converter for international drug smuggling operations. Units costs just ninety-nine cents, which is just a fraction of what you could end up losing by falling victim to fuzzy math during a drug buy. Everybody knows how much dealers love cell phones, so if this app makes the iPhone the cell of choice for black market entrepreneurs Steve Jobs and the folks at who developed Units at Crossroad Solutions should stand to make a pretty penny. Units also calculates distances, temperatures, power for those of you who don’t sell illegal substances. With all of these features, it’s no wonder Units is outselling useless apps like iBeer and the D20 dice.