Unevenly Distributed: How I Learned To Stop Worrying And Love The @ 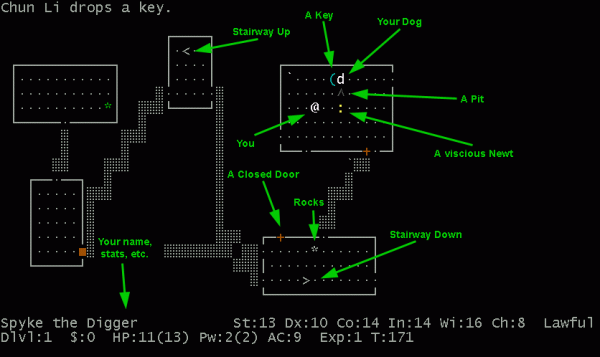 I start this column with only one aim. I would like to try to impart my love for one of the oldest, and most impenetrable, and aesthetically unattractive, and sociopathic and schizophrenic genres of computer game to a reader who will doubtlessly hate it for all of those exact reasons. I’m talking about rogue-likes, so called because of their ancestry in a progenitor called Rogue. Let’s see how I do.

Back in 1985 when I was just a six-year old sprog in Osh-Kosh, my mother worked as a systems administrator for the local telephone company. The particulars of this job of hers are very abstract to me as an adult except in one respect. Her work on the telephony mainframe necessitated the installation in our house of a Unix terminal: a glowing green screen without guts, connected by a ten-mile-long telephony umbilical to a mainframe at New England Telephone’s headquarters in Cambridge. This was my introduction to computers, and the Internet, and the cloud…. all things I now make my money writing about. It also jumpstarted a lifelong passion for video games, which I was sometimes allowed to play when my mother didn’t have any work to do. What a formative little box of radiation and beige!

There weren’t many games available in New England Telephone’s file system back then, and the ones that were installed would today more likely be described as proto-games. None the less, my mother let me play them, starting off small with some ASCII-based renditions of card games I already knew. After a few nights playing Go Fish, though, I was bored and asked my mother if there were any other games I could play. Maybe one with “monsters” in it. Screwing up her eyes as she accessed her own internal ls mnemonic, she suggested I type in “rogue.”

My Mom’s a cool lady; I did. I’ve been delving into cathode-ray dungeons and fighting off insidious typographic horrors ever since.

Rogue was born of the desire of early computer programmers to recreate the experience of playing that nerdiest of early 80s pastimes — pen-and-paper Dungeons and Dragons — on a CPU that would be rejected today for being too underpowered by the manufacturers of the cheap calculator watches you can find in the prize belly of some midway claw machines. If you’ve ever raspingly breathed through your mouth loudly enough to have played pen-and-paper D&D, you’ll appreciate the difficulty of this. Dungeons and Dragons is a math-based game, in which the roll of a handful of polyhedral dice might be translated into the agile facility in which an elf ducks out of the path of a horde of rampaging gnolls… but the imagination behind the math is supplied by a person, the Dungeon Master, who controls and describes your adventure. In D&D, you’re rolling dice in the conjured worlds of a Dungeon Master’s imagination, and the fun for everyone lies in him describing how they fall.

The designers of Rogue saw that a computer could simulate D&D’s dice-based system well enough. It’s just math, and even the simplest computers do simple math well enough. Since the “graphics” of a game of D&D are supplied entirely by the player’s imagination, the rudimentary, text-only graphic capabilities of early 80s computers weren’t an issue either: this was a genre of game in which the player would not only accept but luridly imagine a lowercase ‘a’ as an ichorous, man-eating giant ant. The problem was simulating the Dungeon Master: that omniscient basement overnerd whose inexplicable whims could gelatinize a well-prepared group of adventurers just as easily as it could ascend into godhood the most unlucky and inept gaggle of bumblers this side of Icewind Dale. How do you emulate a living, breathing gameplay element that is both imaginative and capricious?

The Rogue guys saw the only answer available to them with the technology at the time: make everything random… with the dial on the number generator tuned all the way towards malevolent.

When you start a game of Rogue, you always have the same quest: you need to plumb a randomly generated dungeon for an 8-bit MacGuffin, the Amulet of Yendor, which will typically be between twenty and thirty levels down. You, that player, have to find it, and as such are represented by the elegant self-circling curlicue of an @ symbol. It’s a decidedly perfect: not only is @ synonymous with sense of self in the 21st century thanks to its role as the navel of every email address, but it has many more wonderful connotations to fantasy, gender and exploration besides. For example, on modal logic, @ is used to represent the world we are identifying as unique in a multiverse spread across infinite possible worlds; in Portuguese and Spanish, @ is used as a general neutral suffix, denoting both maleness and femaleness at once; in physics, it repesents a trapped atom or molecule trying to find its own way out of its own kind of chemical dungeon.

But I digress. Back in Rogue, your dungeon and all the things in it are symbolized by characters plucked from an ASCII text map. An open door might be a backslash, a pile of gold a dollar sign, a plus sign on the ground an amulet and so on. Here’s the problem, though: because the dungeons are randomly generated, and because the RNG is “tuned towards malevolent,” there’s just no guarantee that even with excellent play you’ll be able to get to the Amulet, let alone beat the game. So much depends upon the dice falling just so. Strategy does count in Rogue, but mostly in the way of cautiousness. Otherwise, everything relies upon the player being lucky enough to find the right armor and weapons and rings and potions, or upon the player not accidentally barging through a door of wall-to-wall zombies, each morse coding their hunger for flesh in the bright blink of a repeating symbolic Z.

It’s estimated that about one in every thousand games of Rogue ends in a win, which makes the game far more capricious than the fantasies of even the most sadomasochistic and sociopathic Dungeon Master. Believe it or not, though, Rogue is a cakewalk compared to the rogue-likes it inspired. Nethack is probably the most famous of the lot. It adds a lot more of D&D inspired mechanisms to the rogue-like mix: for example, player classes. It also radically expands the number of weapons, armor-types, magics and monsters you face. But this is a disingenuously simplistic description of how radically Nethack alters Rogue‘s formula in both intricacy and capriciousness. To illustrate, allow me to quote a couple of random passages from the Nethack Wiki, taken from as innocuous a section as that belonging to the word egg.

“Note that although eggs are surprisingly efficient on the nutrition/weight ratio, eating them can be dangerous. They may be rotten, in which case you will vomit, or on the later levels they may be cockatrice eggs, which will cause delayed stoning if you eat them. If you are already satiated, you won’t get a warning about eating an egg, even if it would choke you to death.”

“If you polymorph into a female Oviparous monster, you can lay an egg with the #sit command, and when it hatches it will become your pet. Laying an egg will reduce your nutrition by the nutrition value of an egg. There is no luck penalty for eating your own eggs.”

“Rotten eggs can be freshened with a spell or wand of undead turning. A freshened egg is never rotten, and it gets a new chance to hatch.”

The “Egg” entry isn’t a particularly choice anomaly; every page of the Nethack wiki is full of this sort of ambitious instruction.

This is why I love Nethack and other rogue-likes so much. Rogue-likes form a genre of game that embraces the limits of what can be conveyed symbolically in ASCII text and turns those limits into strengths. By making a far greater assumption of a player’s imagination than most games — requiring that a gamer will imagine an azure equal sign to be a ring of frost, or turn a rouge semi-colon into a piranha, or a accept a lower-case p as a prancing pony, for example — rogue-likes free themselves of the development overhead that both suffer and limit other forms of video games. Money and man hours can be ignored. Rogue-like developers don’t have to draw, render, animate and give voice to every new monster, item, location or player action in their games; all they need to do is program it and assign it an alpha-numeric symbol.

Rogue-likes aren’t for everyone. They require imagination to play,, true, but they also require a morbid and self-deprecating sense of humor. Even so, if you can make your way past the turn-based interface, simplistic graphics and devious malevolence, you will find more game packed into the scant few megs of your average ASCII rogue-like download than a triple-A company like Blizzard could cram into a title with a hundred top-notch designers. Why? Rapid prototyping and the freedom that comes of allowing the player’s imagination to be the game’s renderer.

If that appeals to you, I recommend Dungeon Crawl Stone Soup as the best, fairest, most polished and accessible of the modern-day rogue-likes. If you have an iPhone and you’re looking for something in the same spirit but a bit simpler, try Sword of Fargoal (bitterly referred to as “Sword of Fartmouth” by my girlfriend because of the many hours she’s lost me to it). Just don’t forget one thing. Rogue-likes aren’t meant to be beaten; they are meant to beat you. Taking sadomasochistic pleasure in letting them? It’s all part of the fun.