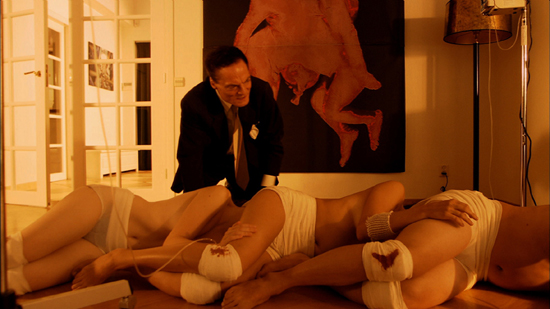 “That calling of kings!” you say. “But to spend my days playing with magic boxes, worshipped and collecting riches for my warrantless opining; the nights, ensconced to the hilt in the honeyed folds of supermodels. That… that… is the life for me!”

I hear you. I once thought much the same thing. But much as I’d like to fancy myself some sort of modern-day James Bond type furnished not so much a license to kill as a license to pedantically explain the differences between GSM and CDMA, blogging about tech for a living is not particularly glamorous.

In fact, if we’re to equate gadget blogging to some occupation in a slice of modern cinema, the film that most immediately comes to mind is The Human Centipede: First Segment. That 2010 parable, directed by Tom Six, focuses on the misadventures of three people who, through a wacky series of missteps, are each sewn… shall we say… input-to-output to one another.

Gadget blogging, you see, is primarily an act of chain digestion.

Let’s start at the beginning: the excreting orifice of a major electronics company. Privately, we gadget bloggers do call this conduit ‘asshole’, but in the plural; in our professional capacities, we have all agreed to use a more polite euphemism, which is PR. Either way, it is the source for fodder of 99% of all news in the gadget world, and our mouths are glued to it like a suckled teat.

Here’s how it works. A major electronics company is about to release a new product. This product is almost always a very slight iteration of an existing gadget… an advance in tech so minor that most consumers would not be able to identify the mutation. The job of PR is to reduce this gadget into what the company feels to be its essence.

This ‘essence’ usually takes the form of an exhaustive list of specs (or the parts and software that make up the gizmo), a handful of high-res and well-lit product shots, along with a peppering of quotes from upper level executives who had nothing to do with the device’s creation. The executives will cryptically explain how this new gizmo fits into the company’s overarching strategy, initiative, paradigm or revolution du jour.

These quotes are not as extraneous as it might seem. Upper management, you see, are the only ones in these corporations allowed to actually express an opinion, relate an emotion or turn a phrase to the press. These figureheads are being called upon to give a dash of the human (if not the soul) to a document so dry, mechanical and predictable of phrase it might as well have been spit out on ticker tape. Gadgets are personal devices: if even the company who has made them can’t start to relate why it matters, how could it matter?

Once a gadget is reduced to its essence by PR in the form of a press release, it is excreted, by which we mean that it is mailed to a list of thousands of bloggers and journalists in one massive disgorgement.

(Sometimes this disgorgement comes with an embargo attached, which is generally why we gadget bloggers call PR ‘asshole’ in the plural. An embargo is a presumptuous dictate from PR that says that no one will make public the product covered by a press release until a certain date and time. Of course, there’s nothing stopping anyone on the list from going public with a gizmo announcement before the embargo. No one’s signed anything. Still, it is tacit that if you defy an embargo, you will be cut out from all further excretions from that company’s corporate orifice, which will put you one further segment down the human centipede’s digestion chain… which is why we hate them. They force us to tacitly acknowledge our place in the whole macro-organism.)

Once a press release arrives in a gadget blogger’s inbox, it’s time to break things down again, but there’s a different digestive enzyme in play here. PR’s job is to reduce a product to its essence. It’s the gadget blogger’s job to make people care… or, more appropriately to the metaphor, to give a shit. The best way to do that? It’s also appropriate to the metaphor: we need to give a shit ourselves.

I suppose during the whole column, you’ve suspected that this “Human Centipede” business was going to play out to be an obvious denunciation of my career, easily summarized as “Gadget bloggers eat gadget company shit, then shit it into your mouth.” But I love my job. I do think it matters. Why? Because a blog is a filter — your filter; you chose it! — of a stream of shit, and a blogger is the guy who not only digests that shit for you, but can even makes it nourishing.

Sure, bloggers are rarely and accidentally journalists in any real sense of the word. When bloggers conduct real journalism — as Gizmodo did in busting open the iPhone 4 months before release — not only are they blacklisted, but it ultimately feels inconsequential mere weeks later. Still, that’s okay. Journalism really isn’t a blogger’s job. Blogging is editorial. Digestion is editorial.

A blogger’s job is making things make sense. He digests a new gadget according to its context, and makes what is, at the end, a soulless list of specs and inner corporate cynicism into some semblance of human experience, understandable to the reader site unseen. In his cynicism, or exuberance, or practicality, or pedanticism, he connects another box of circuits to a real person’s life.

A blogger tells you that a new digicam’s megapixels are less important than its shutter speed and aperture, and so those are the specs you should pay attention to, despite the need for marketers to stress the biggest number. He reminds you that RAM and an SSD are ultimately better investments for most people than a speedier processor, and consequently puts some new, wafer thin laptop that seems markedly worse to a thicker brother in perspective. The blogger figures out why you can’t get a software update for your new phone, and tells you when he thinks that’s a matter of obsolescence or a matter of forced obsolescence. He tells you why the best smartphone in the world can’t come to your network, and what you should buy instead; he also explains why — when that phone does come to your carrier — why the effort to get it there was Herculean, and why you shouldn’t buy it anyway.

Ultimately, you, the reader, are the last mouth in the gadget blogging human centipede, but you’re not sewn to anyone’s ass, and how many segments are in the centipede you’ve attached yourself to is up to you. Across a chain of digestions, as a macro-organism itself, the human centipede is able to crowd source the opinion, the feeling, the emotion, the context, the history and the hardware of a gadget — its whole essence; the definition of its zeitgeist — into something that every kind of reader can get something different out of reading about.

Sure, we’re all still segments sucking up shit. But at least it’s good shit and our palate for it is refined.