Tropical paradise on the steppe 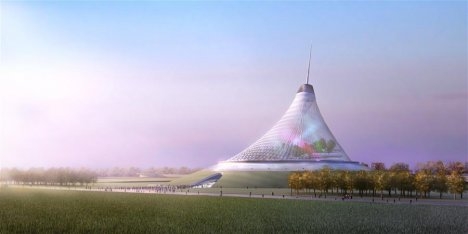 By next Christmas Astana, the capital of Kazakhstan, will be under a giant, permanent tent. Astana was not even the capital of Kazakhstan until 10 years ago, when President Nazarbayev decided to move it from Almaty. Astana, the new capital, is in the central steppes, where temperatures reach -30C in winter. The new tent will change all that. Covered in ETFE, a material that absorbs sunlight and traps heat, it will allow the citizens of Astana to enjoy a summer-like atmosphere all year round, shopping, swimming, and sipping lattes without worrying what the weather is like. The tent will be constructed by Sembol, a Turkish development company, and the project is being spearheaded by UK architect Lord Foster. Called Khan Shatyry, it will cover an area greater than ten football stadiums.   If successful, the project could spur development of similar enclosed cities elsewhere. — Mike Payne