Toy DMB TV with an attitude for you to crack 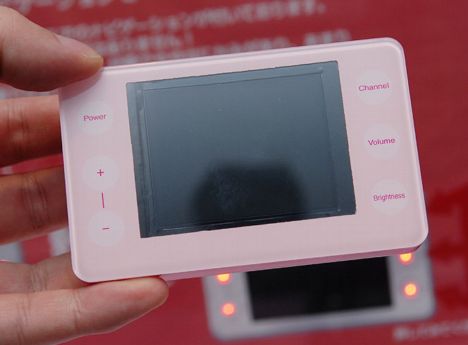 You know how sometimes you need to have the gadget grow on you after the purchase before you start to get comfortable with using it? Well, Japanese toys manufacturer Takara-TOMY has brought this to a completely different level with the new kind of One-Seg DMB toy TV they showed us at Toy Forum 2007 this morning. This portable TV itself certainly reminds us of the iRiver Clix, it carries a 3″ QVGA TFT screen which is not bad, and it runs on alkaline batteries you buy supermarkets (61x99x20mm). The TV can last up to 4 hours each time and you can record your programs to microSD. What’s so special about it is that there is actually a character built in- a female voice that will respond every time you press the a button: changing channels, adjusting brightness and volume, turning it on or off.

The voice will start off as being unfriendly, but as time goes by, when you use the buttons more it’ll become more and more friendly. And this change of attitude will be reflected by her reaction when you press your buttons. So on the first week she’ll say things like “Don’t you think it’s a bit too bright?” or “Are you just changing channels for fun because it’s annoying…”, but if you get acquainted with the TV over time, she’ll start saying nicer things like “Oh, you’re back!” or “Yep, turning up the brightness for you now”. (We’re serious, these quotes are translated carefully) The company is going to release a whole series of these TVs with different characters and different personalities. We think it’s a bit kinky, but in case you are interested, you can pick them up in Japan for 200USD autumn this year. — Sam Chan