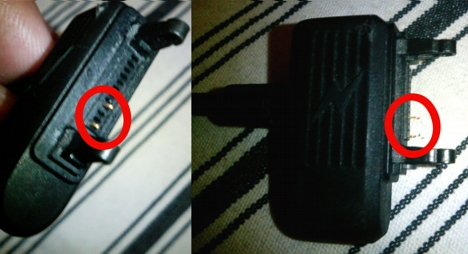 The SonyEricsson K750 and W800 are one of the most readily seen phones on streets nowadays, they’re pretty good phones really, the Walkman and camera both work reasonably well. The biggest problem with SonyEricsson phones is that the “Fast Port” (for charger/data/headset connection) is not the most well-designed, since you’re attaching everything to same port, it tends to wear out so much faster than other brands that have separate plugs for headset and power for example. There has been immense discussion over user forums concerning this issue, different people tried different things: alcohol to swab the dust and rust off, or simply buying a new cable; fortunately the Fast Port is improved on newer phones. Earlier today we spotted a pretty smart tip on one of the Chinese forums, and it worked really well with our super worn-out w800i. The trick is to give the 2 delicate spring-metallic flaps (circled above) on the connector some push, once they’re warmed up and bounced back to their original positions, you’re good to go. Try that out and let us know if it works for you too. —Sam Chan