This Ice Cube is Mind-Bogglingly Immense 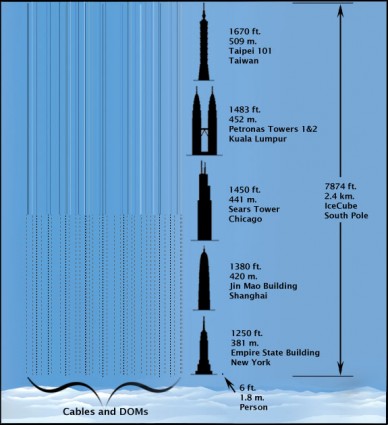 Completed on December 18 of last year, the IceCube Neutrino Detector is a mind-boggling scientific instrument. Located at the South Pole’s Amundsen-Scott research station, it consists of 86 strings of 60 bowling-ball sized optical sensors per string, each of which hangs in a hole drilled 2.4 km deep into the Antarctic ice. The whole array occupies a cubic kilometer of glacial volume; the graphic at right gives us a sense of what kind of space that takes up.

But in a sense, IceCube is an even bigger instrument than its glacial volume suggests. Its optical sensors detect Cherenkov radiation: faint blue flashes in the frozen darkness, each of which represent the collision of a neutrino with an atom in the ice. Neutrinos are so small that they normally stream through matter unhindered; of the occasional collisions detected by the IceCube’s sensors, most are the result of cosmic radiation streaming through the atmosphere above the ice. The scientists who built the IceCube are looking for neutrinos spawned in faraway, high-energy phenomena like collapsing stars and colliding black holes; to filter out the atmospheric neutrino events, the IceCube’s sensors are aimed downward, pointing at the northern sky, using the Earth itself as a filter. So in a sense, the IceCube is a scientific instrument the size of the planet.