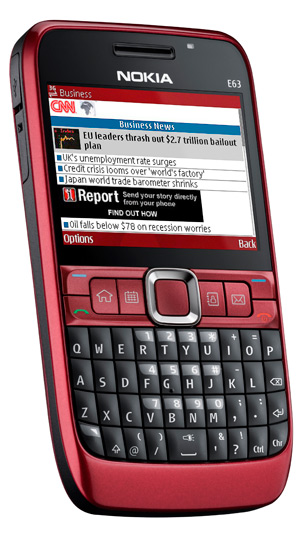 Nokia has formally launched its latest handheld device, the E63, as a budget alternative to the E71 and a competitor to RIM’s Blackberry. The E63 sports a 3.5mm audio port, a two megapixel camera with LED flash in addition to a microSD card slot for extra storage and a redesigned QWERTY keyboard with a smaller space bar and some extra character keys. Nokia also plans to give all E63 owners free access to 1GB of space through Files on Ovi, which allows you to access files on your computer from your phone via the Internet.

But what exactly makes the E63 so budget friendly? Simply put: the E63 swaps the part-metal casing of the E71 in favor of a plastic casing. This drops the price of the E63 to $251, making it an affordable smartphone in the wake of the Blackberry. As of now, no release date has been announced but it’s only a matter of time before one shows up on eBay.