The New Years Ball Gets A Brand New Crystal Coating!

This new years eve the ball that sits atop Time Square is a little something different, it has a brand new and absolutely brilliant crystal coating. 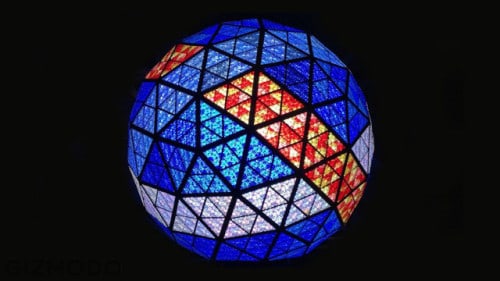 The 2013 / 2014 new years eve ball has a brand new crystal coating and it looks absolutely amazing.  Over the past few years the Time Square ball has undergone some amazing changes as technology has advanced and this year’s ball is no exception! The new ball certainly is a far cry from the wood and iron 700 pound ball that was used to celebrate the very first new years eve! Where the very first new years eve ball was decorated with 100 light bulbs, the newest incarnation of the ball was first put up in 2008 and features 32,256 Philips Luxeon Rebel LEDs. Each of these LED’s are encased in Waterford crystals and the 12 foot wide sphere weighs 11,875 pounds!

In celebration of the 2013 / 2014 new year the crystals that encase the LED lights have been completely redesigned creating a much sleeker appearance to the ball. The ‘theme’ of the ball if you will, was titled “The Gift of Imagination.” The new crystals in combination with the brilliant LED lights create a multitude of colors making the whole show look like a kaleidoscope.

Keep your eyes open this new years eve as the beautiful ball drops from 760 feet in the air over Time Square!