The Microsoft eToilet: a throne for the digestively challenged 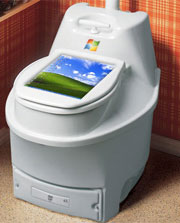 Some people are so extremely busy that serious harm is caused to their digestive system by the long waits they put themselves through to use the toilet as they stare idly into the computer screen. Other people just have a hard time holding it in and have to run to the toilet 40 times a day. For those of you with either of those afflictions (or both), Microsoft has devised an answer to the person who just can’t let their pupils drift from a computer monitor for more then a few minutes.

The Microsoft eToilet comes equipped with a 21-inch touchscreen monitor, which we wouldn’t mind having even without the toilet. The monitor swivels to face you as your bowels are in transit and even boasts a special sensor to protect from splashes (eww).

Retail price will only be $499 to $599, which isn’t much considering the coolness you get in return. The eToilet will be released next month, but so many questions go unanswered. Will it be available in plumbing stores, home goods stores, or computer stores? Or all three? Are the businesses of bathroom needs and computers destined to be linked? — Andrew Dobrow