The Internet and Politics: It’s All Good (Except When It’s Not) 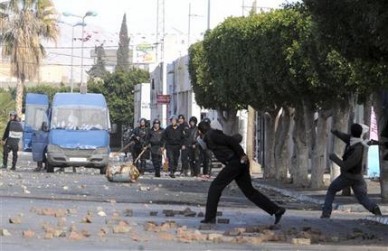 If you need a parable for the potential and pitfalls of a social-media enabled revolution, this is it: the very tool that people are using for their activism becomes the very means by which their identities could be compromised. When the details are filled in on the abstractions of Clay Shirky and Evgeny Morozov’s work on the promise (former) and danger (latter) of Internet activism, the ground truth seems to be that both had their visions play out simultaneously.

Alexis Madrigal in a smashing piece of reporting on the social media in the midst of the uprising in Tunisia—and in particular, on shadowy elements of the Ben Ali regime’s attempts to steal passwords and login information from Tunisia’s Facebook users. In responding to the effort as a simple security breach, and not a political act, Facebook engineers were able to plug the leak quickly. But in the aftermath, the social-networking service faces serious questions about its role in the lives and work of political actors, both state, and non-state.

Behind the commentariat’s straw men and carnival-game targets, the Internet appears neither as a force for good nor ill alone—it’s always already both. Just like the various loosely-joined pieces of the public sphere always have been. The response isn’t some kind of memetastic quietism, but an eyes-open approach to openness and dialogue, a cultivated awareness that one’s information is never complete, the exercise of completing it carries moral weight.