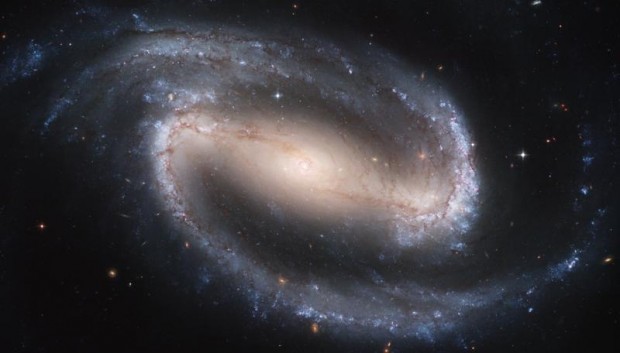 The barred spiral NGC 1300 is today’s scene in the Hubble Advent Calendar, a fun project from the Boston Globe‘s eye-popping photo blog, The Big Picture, curated by Alan Taylor with his customary wisdom and flair.

Credit for this image goes to NASA, ESA, and the Hubble Heritage Team, who set the scene as follows:

The Hubble telescope captured a display of starlight, glowing gas, and silhouetted dark clouds of interstellar dust in this 4-foot-by-8-foot image of the barred spiral galaxy NGC 1300. NGC 1300 is considered to be prototypical of barred spiral galaxies. Barred spirals differ from normal spiral galaxies in that the arms of the galaxy do not spiral all the way into the center, but are connected to the two ends of a straight bar of stars containing the nucleus at its center.

Visit The Big Picture tomorrow to see the final pick—and all 25 of the photos Taylor has culled from Hubble’s amazing trove of astronomical imagery.