Test: A bike ride with the PSP GPS 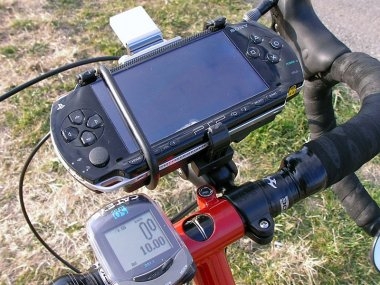 While we’re still waiting for the PSP GPS module to be released in North America, we can take a look at what  it can do in Japan. The guys at NikkeiBP have taken the PSP GPS module for a spin this weekend, this time they’ve used  the MaPlus Portable Navi software. Data stored in the 1.8GB UMD is enough for people living in large cities, but it’s always impossible to include absolutely everything.

The map is pretty updated, convenient stores that were opened for just a few months were shown properly. So click on the GPS module to your PSP and attach  it to your bike and you’ll have a satellite navigated bike. You can set your destination and the PSP will figure out the best itinerary on foot (and by bike) or by car; with a female voice telling you to take turns when you are at  junctions.

The program has over  10,000 different destinations for you to choose from, sorted out by genres; it also contains basic touristy information for the bigger attractions. Eventually the NikkeiBP dude managed to get to where he wanted to go, the biggest problem he reported was the poor screen visibility under the sun. We have more screenshots after the jump.