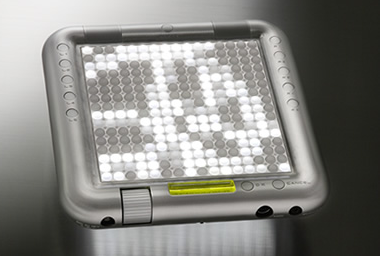 Yamaha and media artist Toshio Iwai team up to create the Tenori-On, a new musical instrument for the 21st century. The new instrument creates an intuitive visual music interface using a 16 x 16 matrix grid of LEDs.

Using a mixture of input and LED interaction, anyone can create a visual musical piece as they play around with Tenori-On’s sound and light modes. It adds a whole new level of versatility to music with its 6 mashable setting modes that can be mixed and molded for your pleasure. — Andrew Dobrow