Take A Look At The First Ever Living Cell X-Ray!

Take a look at the first living cell x-ray pictured below. A new technique developed enabled scientists to view this cell without killing it or changing its composition. 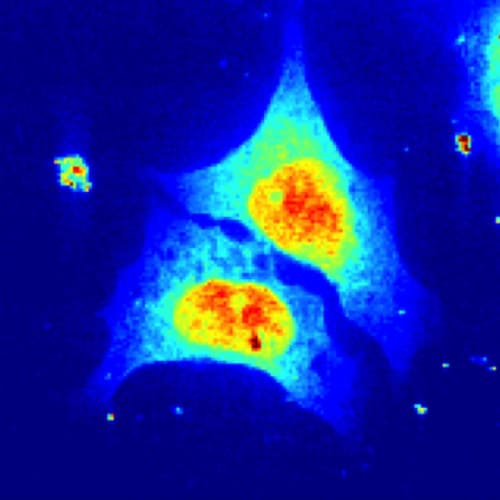 Scientists at the DESY Research Center in Germany have found a way to xray a living cell without changing the internal structure of the cell or killing it as previous methods did. This new method now means that it is possible for researchers to take a look at the cell in its natural state.

The German researchers managed to keep the cancer cells from the adrenal cortex alive by growing them on silicon nitrite plates, pumping the cells full of nutrients and using .5 millimeter channels to evacuate the cells metabolic waste. The x-ray blasts used to scan the cell were just .05 seconds since extended exposure to x-rays will kill the cells being viewed.

It wasn’t until the viewing of this new type of x-ray process that researchers were able to determine just what a significant difference the new process makes in viewing the cell. Previous method of cell x-ray involved preserving the cells artificially which both kill and alter the cell structure.

So why is this new technique such a significant development? It allows researchers and biologists both to view the infinitesimally small structures that are located within cells allowing them to get a clearer picture of what really takes place inside cell walls without damaging the cell itself.