Nottingham, England is notable for the tracery of sandstone caves—some natural, others artificially enlarged or hewn from the living rock—that runs beneath the city. In the 14th century, troops under orders from King Edward III stole into the city by means of one of these caves in order to arrest Roger de Mortimer, who was believed responsible for the death of the king’s father. Now, the Nottingham Caves Survey is in the midst of imaging not only “Mortimer’s Hole,” but all of the city’s more than 450 caves. (The survey is based at University of Nottingham, whose chemistry department produces a Gearfuse favorite, the Periodical Table of Videos series. Happening place, Nottingham.)

The caves are imaged with laser scanners that collect up to 500,000 survey points per second. The video above compiles data from numerous such scanning sessions, creating a fly-through of what looks like an admirable game world. As Geoff Manaugh writes at BLDGBLOG (where many other images may be seen), “it’s intoxicating to imagine a city whose most exciting discoveries lie somewhere far below its own streets and urban surfaces, in a delirious sprawl of artificially enlarged sandstone caves. ”

The imagery reminds me of something else, however: the nests of ants. In particular, it called to mind for me a picture I first saw in E. O. Wilson and Bert Holldobler’s book The Leafcutter Ants: an image of a nest of Atta laevigata excavated after its passages had been filled with six tons of cement: 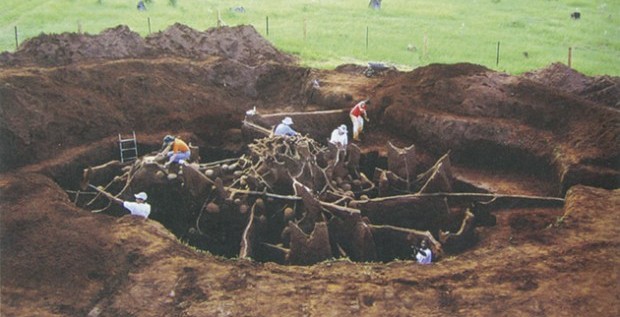 It looks like a vast archaeological dig turning up the ruins of a past civilization. Which it is, really. Below, a segment of the news magazine CBS Sunday Morning about ants, in which an entomologist shows how he makes a cast of a nest by filling it with molten aluminum (begins at about 1:48):

A massive aluminum model of a subterranean ant city is great. Obviously, however, 3D laser scanning would be preferable from the perspective of the ants.

All this underground modeling makes me imagine a 3D subterranean layer For Google Earth—a kind of Streetview for the caverns of the world, from the sewers of Paris to Mammoth Cave, from Yucatan cenotes to Chile’s Copiapó mine. If it included all the ant colonies, of course, the amount of data would be mind-boggling: petabytes, perhaps yottabytes even. There wouldn’t be room for the servers needed to store all that data—unless perhaps we put them underground.