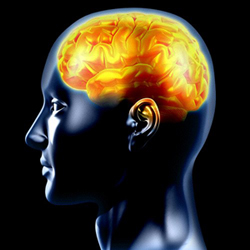 Back when cell phones were first becoming commonplace in the world, rumors were abound that the radiation emitted from these new devices would lead to the formation of cancerous brain tumors. While these rumors have been all but squashed (depending on who you ask), there are still a number of questions regarding the effects of cell phone use on the brain. Now that picture seems to be a little clearer.

Researchers from the National Institute of Health, led by Dr. Nora D. Volkow, have discovered that less than a single hour of cell phone use can speed up brain activity. Volkow, unfortunately named to sound like a super villain, expressed that caution should be taken in interpreting the findings of this study, and that these findings are just the beginning of understanding a cell phone’s full effects on the brain:

The study is important because it documents that the human brain is sensitive to the electromagnetic radiation that is emitted by cellphones. It also highlights the importance of doing studies to address the question of whether there are — or are not — long-lasting consequences of repeated stimulation, of getting exposed over five, 10 or 15 years.

The study itself, published in the Journal of the American Medical Association, showed that while the metabolism of the brain as a whole did not increase, areas closest to the device (i.e. whichever ear you hold your phone up to) showed that metabolism was “significantly higher for on then off conditions.” The conclusion of the study stated that their findings were of “unknown clinical significance,” which is super-technical medical terminology for the puzzled-faced shoulder shrug.

This is all well and good. Now let’s figure out why my Droid can play games, do complex math calculations, surf the Internet, play music and let me check my email but can’t complete a damn phone call.