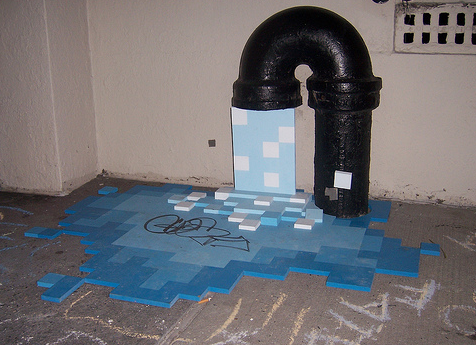 Found on the streets of New York, located on the NYU campus, between 2nd and 3rd St. by the Barney Building, sits a hidden gem of street art. Captured and uploaded onto Flickr by user hungryghoast, the “Flowing Pixel” street sculpture depicts a faucet spitting out pixelated water.

The piping sort of reminds me from that secret area in Super Mario Brothers’ where you would press down while in the center of one of the pipes on the first level, and be thrust into a little room pull of gold coins. Bonus round FTW! — Andrew Dobrow