Stick the Landing: Vote for the Apollo Stamp 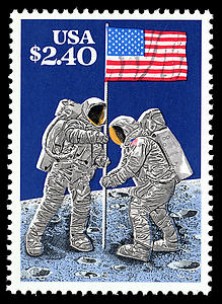 You won’t find many candidate endorsements at Gearfuse, but here’s one we can heartily commend: vote to make this commemorative Apollo stamp the US representative in a new gallery of International stamps at the Smithsonian’s National Postal Museum. It’s hardly the only stamp to commemorate the first moon landing—even stamps from Qatar and Liberia have done that—and at $2.40, you’re unlikely to have come across this priority mail cover in the course of postal business. But its design admirably evokes the Apollo moment, and furnishes a more telling postal commemoration of US achievement than the ubiquitous-looking statues of liberty, stars and stripes, and capitol domes of the other candidates.

Endorsement aside, we can only hope there won’t be an funny business around this vote—unlike the infamous Apollo 15 incident, when crewmembers were disciplined for cutting a deal with a German stamp dealer to carry a packet of collectible stamps to the moon in exchange for a cut of the proceeds—just another example of the colorful postal history of the moon landings that makes this stamp a fit choice for the new gallery. [via It’s Full of Stars]