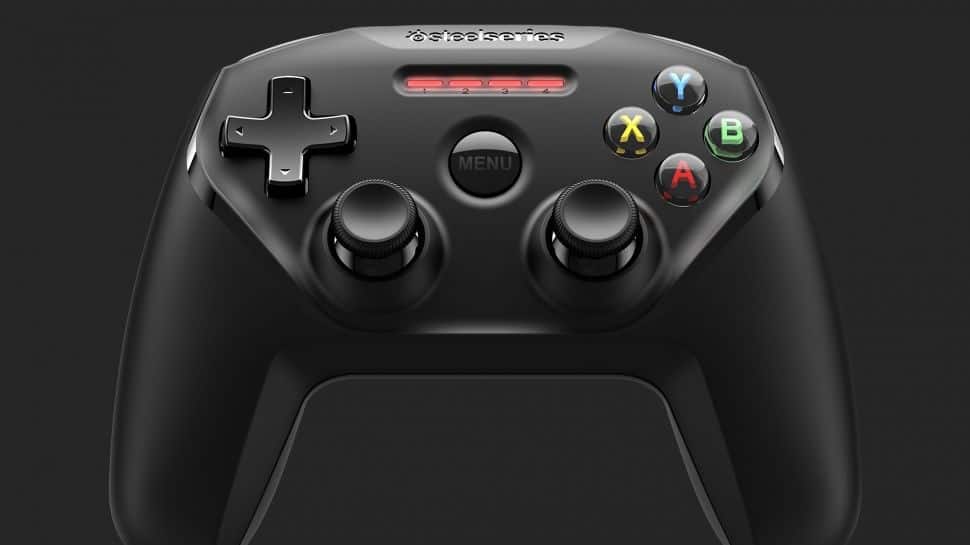 When Apple unveiled the new Apple TV and told us all its capabilities, the key ones being it would support gaming they overlooked to mention that certain made for iDevice gamepad controllers would be compatible with the device. So when SteelSeries announced the brand new Nimbus gamepad controller built specifically for Apple TV many people were certainly surprised, but it’s definitely great news for the gaming community. Furthermore while we suspect the new Apple TV will focus on casual gaming, its chances of appealing to the hardcore market will increase with the addition of SteelSeries’ new controller.

The SteelSeries Nimbus has been designed similarly to the Xbox One controller and is equipped with A, B, X, Y buttons, and features a large Menu button in the centre of the controller mirroring the Menu button on the new Apple TV remote. The SteelSeries gamepad will also provide 40 hours of gameplay on a single charge and will be able to be recharged via a Lightning cable, making it the first accessory to do so. Additionally SteelSeries also say the controller will have pressure-sensitive trigger and bumper buttons for maximum precision and precise control.

Furthermore when announcing the Nimbus controller SteelSeries CEO Ehtisham Rabanni had this to say “SteelSeries is at the centre of the biggest evolution in gaming and Nimbus represents a new standard in wireless gaming controllers and we’re pleased to be bringing this controller to this incredible platform. Our global gaming pedigree, together with our unyielding pursuit of simple, modern design is on full display with Nimbus.  We’re thrilled to deliver a truly premium product for the new Apple TV at a great price.”

While the SteelSeries Nimbus controller has designed for the new Apple TV it will also be compatible with iPhone, iPad, Mac and more will be disclosed closer to launch.  Currently the gamepad is featured prominently in the “Games and More” section of the new Apple TV’s page on Apple’s website, suggesting Apple and SteelSeries are positioning the controller as the flagship gamepad for the Apple TV.

The SteelSeries Nimbus will retail for approximately £30 to £40 when it launches in most likely late October, which is a rather reasonable asking price if you ask me and overall I think it will be a big hit amongst gaming community.

Get the best deal on your gaming equipment and head over to Box.co.uk who have a wide range of gaming laptops, PC’s, monitors, keyboards, mouse’s, controllers and much more at competitive prices.