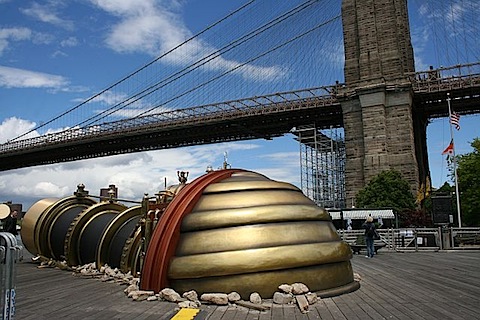 We celebrated the 125th birthday of the Brooklyn Bridge last night and boy was it a party. We had some drinks, mingled a bit and eventually watched a guy named Paul St. George bring in a huge Telectroscope. The Telectroscope, in theory, is supposed to let people from London and NYC look at each other via an undersea tunnel with a complex mirror setup. Luckily, it’s all a crock of crap and it really works using two webcams and a broadband connection. One person looks in, another does the same and suddenly, two continents become one.