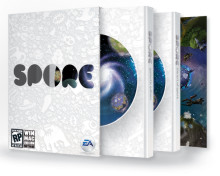 And by Galactic, I mean Spore: Galactic Edition of course. If you’re a gamer who needs every piece of memorabilia a game has to offer then you won’t mind shelling out $80 for this special edition. Remember Vince’s monstrous pal, Bonerfart? He died. But, that’s only because Vince didn’t reserve his copy of Galactic Edition, guaranteeing him the 100-page galactic handbook which would’ve told him his creature was a vegetarian. The pack includes:

Remember, if you don’t want your monster to suffer the same fate as Bonerfart’s, you’ll wise up and secure your galactic handbook today or the civilization you’ve created in Spore could become extinct quicker than you expected.
Link (via)