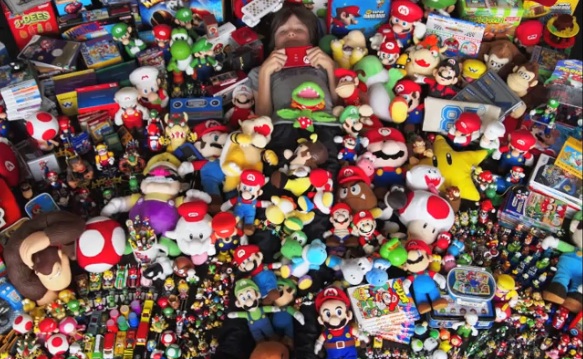 Oh to be young… and the child of filthy rich parents. Seriously, just the look on this privilege-faced snot’s mug makes me want to deck him. I bet he’s the type of kid who cries and whines when he doesn’t get the piece of Mario gear he wants, or “needs” is probably the way he puts it. Reality is going to hit this brat like a ton of bricks. But I’m probably just jealous.

11-year-old Oscar Bown, buried somewhere in that pile of smug “hey-Andrew-look-what-I-have-and-you-don’t”-ness, has well over 1,000 pieces of Mario memorabilia and he shows no signs of stopping his parents from buying him every known collectible they can get their hands on instead of donating that money to charity so other children can eat a single meal of bread and water a day. Just ridiculous. Now if you’ll excuse me, I have a Tesla made of solid gold in need of polishing. Hit the jump for a video view of the massive collection.