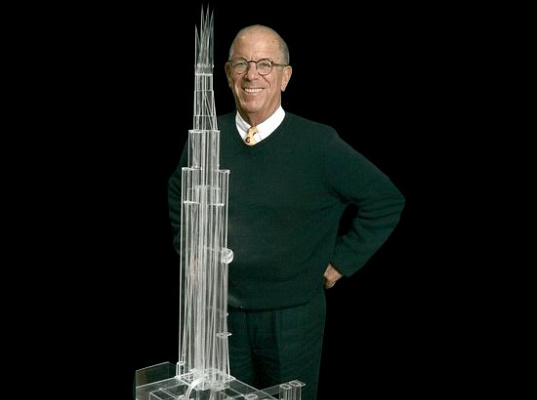 We thought everything was bigger in Dubai.

Santa Monica building designer Tommy Landau created a model for a 224-story supertower which could one day stand in Abu Dhabi. Hell, the model itself is almost as tall as a man. The structure, aside from far eclipsing the 2,600 ft. Burj Dubai, would be coated in solar cells which would allow the building to power itself. The building will house over 11 million square feet for offices, shops, hotels and condominiums (but no farms that we know of). An early concept of the building includes a large clock at the same height as the Empire State Building would reach on the building.

The project is still under consideration by the Abu Dhabi powers that be, though if approved the $3.5 billion project would likely not be underway for several years to come. I imagine it takes a massive amount of planning and bureaucratic cajoling for a project like this to even break ground