Slow And Steady Wins The War On Drugs 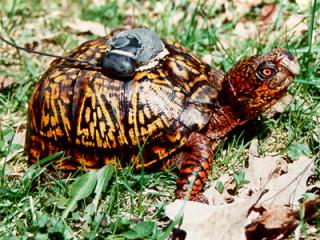 Growing marijuana is a crime and that’s a damned shame. It’s no mystery that it’s a great pain reliever and can turn any award winning drama into a laugh-out-loud comedy. The war on drugs has always been a controversial topic in the realm of political agenda and the media. It’s only getting more controversial now that they’re busting growers with GPS turtles. Yes, GPS turtles.

After reports of several marijuana fields throughout Rock Creek Park south of the DC/Maryland line, the U.S. Park Police set up surveillance. Ordinarily that would mean they equipped the area with strategically placed cameras, but instead they exposed this grower with help from a box turtle fashioned with a GPS device. They eventually found the little guy crawling through a big pot field. What a terrible way to go down…busted by a turtle.