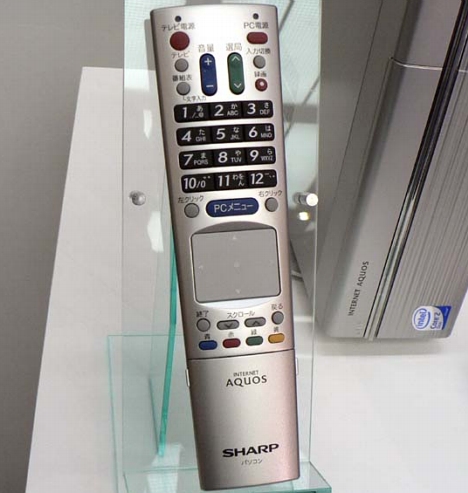 Sharp updated their line of AQUOS-TV-plus-desktop-PC series, but we are not interested in that. What really caught our attention was the remote the came with it, because it is the world’s first remote controller with a touch pad. Now you can have a real TV-internet experience, just forget about your keyboard and mouse, you can type with the alphanumeric keys just as it is on phones, you can also browse the internet easily with the intuitive touch-pad. Thanks to the touch-pad and the redesigning of the menu, the number of buttons on the new remote has decreased 40% from the older one, which is already really good considering that the OS is from Microsoft. (You can’t exactly compare this with the iMac remote, as this is so much more powerful) We can expect the touch-pad remote be followed by other manufacturers later, or at least be applied to a wider range of Sharp products. The new remote will ship with the new Aquos PC systems in late March. —Sam Chan