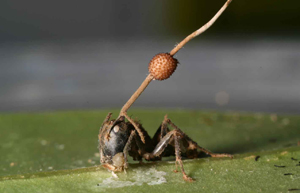 Scientists from Penn State University have discovered at least four new types of cordyceps fungi. These four species of fungi, like the previously known cordyceps fungi, are parasitoids that often infect insects.

Oh, and did I mention that these fungi essentially turned the infected into zombies before killing them? Because if not, well… they do.

PSU Entomologist David Hughes and a team from the university cataloged four new types of the fungi, which has acquired the nickname of the “zombie-ant fungus” for its tendency to somehow control ants and other infected insects and instructing them to do things they would not otherwise do. In the case of ants, the fungi forces them to leave their colony and relocate to a place more suitable for the fungi to spread. Once this is done, the ant dies and fungus grows out of its head. Of the four species discovered by Hughes and his team, two of them featured additional fungus growth from the feet and joints.

The first fungus, Ophiocordyceps unilateralis (sexy name – JW), was discovered in 1865 and is believed to exist worldwide… oh joy. According to Hughes, there could very well be “hundreds” of species of cordyceps. Luckily, one of these newly discovered species, O. camponoti-novogranadensis, may soon be extinct due to global warming, as the location where it was found is becoming much drier and much hotter due to global warming.

“Hot” and “arid” are two things that do not agree with fungus of any kind.