Sell That Google Stock: Batmobile For Sale on Ebay 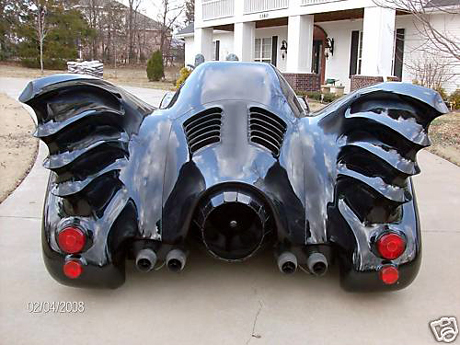 Stop the fucking presses and grab your dick and hold on, ’cause you’re in for a ride my main man. Turns out some dude is auctioning off a real Batmobile from the original Tim Burton flick on eBay. With gas the way it is nowadays, I can’t blame him for selling the car but wow, what a beauty! It’s almost as tight as the Tumbler from TDK. Hit the jump for the exact details and a link to the auction. It’s currently going for $110,000, so no cheapskates.

Nana na na na na na na na na BATMAN. That is what your neighbors will say when you pull into the driveway. How many people do you know that have a Ferrari, a Mercedes, a Lamborghini, or a Corvette? My guess would be there is at least one of these in your neighborhood. Now how many Batmobiles are in your neighborhood? None, because there were only a total of 5 of these cars made.
Here it is one of 5 cars that could have been in the “Batman” movie staring Micheal Keaton and Jack Nicholson. Five cars were built for the movie and this car is the number five car. Being that this car originally was owned by WarnerBros productions it is important to note that the buyer will have tosign a contract with Warner Bros. If you would like to know more about this contact me and I will give you all the details.
The car is 20 feet long and 8 feet wide. The chassis is custom built and the motor is a Chevrolet 350. There are no doors. To get in you have to be able to enter through the top where the canopy slides opens, just like in the movie. There is no title to this car and will only be sold with a bill of sale.
Batmobile 5 has been sitting in the “Batcave” for almost five years now, and it is time for another Batman enthusiast to enjoy her as much as I have.