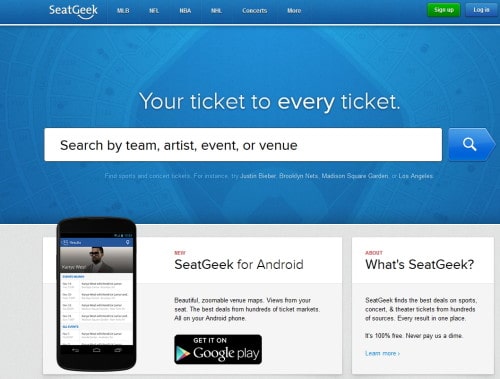 Launched at the TechCrunch50 conference in 2009, SeatGeek is still considered a “start up” company but in a recent move they have made their first acquisition of a competing company. SeatGeek acquired FanSnap after receiving $2.2 million in funding.

Both SeatGeek and FanSnap were sites designed to allow users to search for event tickets over a variety of platforms including eBay and StubHub. So if the two sites were essentially the same thing why the acquisition? Co-founder of SeatGeek, Russell d’Souza, indicates that there were multiple reasons including improving exposure to the SeatGeek name and acquiring the technology behind FanSnap in an effort to keep it out of competitors hands.

So what will become of users of the FanSnap website? As of December 19, they are all being redirected to the SeatGeek website.

What did SeatGeek pay to acquire FanSnap? No financial details have been revealed as of yet but d’Souza was willing to offer the following financials:

“SeatGeek is currently selling $6 million worth of tickets each month, about triple what it was selling at the same time last year, with 3.5 million monthly visitors across desktop and mobile.”