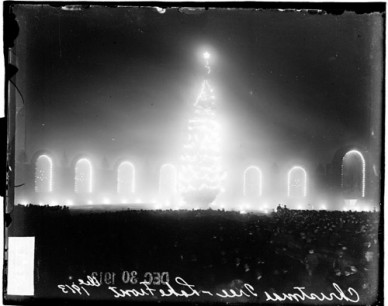 From its 1840s incarnation as a small plant placed on a table so that Kriss Kringle would have a place to put presents, the Christmas tree grew into a particular kind of technological spectacle. The lights in our trees might seem commonplace or trite, but once upon a time (and a time not long ago, in a place very close to home), they became a symbol of progress and the power of electricity to make light without flames.

We don’t often think about it this way, but the modern Christmas tree is a fundamentally technological object. Those strings of lights meant something once upon a time. And they did work in the world, too. Christmas trees became part of how electricity was converted from a dark and mysterious force that occasionally descended from the heavens to kill people into a safe and domesticated product that lit up your living room.

—Alexis Madrigal at the Atlantic tells the story of the blinking, glistening Christmas tree, and how it helped to domesticate the terrifying energies of electricity around the turn of the last century.