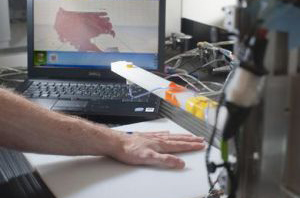 Scientists have developed a new form of skin grafting that would allow cells to be “printed” to the human body in a manner similar to that of how ink is printed to a piece of paper. Two techniques were shown off at the American Association for the Advancement of Science conference in Washington, D.C..

The advances in “printable skin” technology comes from Cornell University’s Hob Lipson and James Yoo of Wake Forest. The idea behind printing skin involves a 3D printer that would create layer-upon-layer of skin after scanning the injury and taking sample cells. According to Lipton, this could significantly reduce the number of rejections seen in patients.

Just imagine – if you could take cells from a donor, culture them, put them into an ink and recreate an implant that is alive and made of the original cells from the donor – how useful that would be in terms of avoiding rejection. That is where we are going. Let’s see how far we can go.

The 3D printer was displayed during the conference in New York, where it built a prototype ear in roughly thirty minutes. While the 3D printer can easily handle cartilage, Lipson acknowledges the limitations of the device.

There are very severe limitation. We are right now limited to cells… that can handle being printed.

One major hurdle yet to be conquered is figuring out how to connect the printed skin to existing human tissue. This is a concern that James Yoo realizes:

One of the challenges that we will eventually face is like anything else, when you are trying to transfer the technology into the body, how can we create and connect those tissues? Whatever you put in the body has to be connected with the body’s blood vessels, blood supply and oxygen.

I see this as humankind being one step closer to creating a real-life version of a dermal regenerator. As it stands, once they figure out how to graft this skin to actual human beings, Yoo and Lipson may very well be responsible for saving a lot of lives.