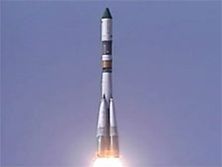 Today at 9am EDT, a Russian supply craft was launched into space. The craft was called the “ISS Progress 44”, and it carried nearly 3 tons of supplies for the International Space Station.

For the first 20 minutes, everything went as expected. However, twenty minutes after launching, the control base lost communications with the craft. “We did not report stage separation”, said the head of the Russian Mission Control Center.

Thankfully, the crew on the ISS has plenty of supplies, and the station seems to be in good repair. However, as of right now, no one knows what happened to the missing Russian supply craft. Right now, the craft is being written off as “lost”, as the Russians launch a full investigation.