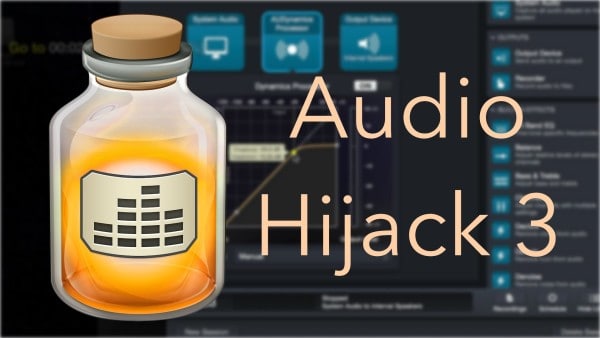 The Mac application, Audio Hijack is a robust program with an interface that looks like it was designed in the headquarters of Apple. It was designed to grab audio from audio input devices or apps, even your laptop’s built-in DVD player, so if there’s a bit of movie dialogue or an audio track you’d like to record, this software can do it easily. The Audio Hijack review is actually quite favorable. It has been a clear favorite of many Mac users, and with the release of the latest version Audio Hijack 3 the makers has certainly taken a huge stride in making it one of the all-time favorite sound recording software for Apple devices.

Powerful and inventive though the app was, however, its user interface was not very clear. This should not pose a problem anymore as the latest version features a template chooser. All you need to do is set up a new session and (on the session widow that pops up) you can pick the type of task you’d like to do- record audio from an application, pull audio from a DVD, record sound from an audio interface or microphone, improve current tracks, record VOIP conversations, grab your Mac’s audio or capture audio from a simple web browser. Pick what you’d like to do and click Choose.

In most cases, all you’ve to do is click the Record button right at the bottom left of the window and start capturing any audio. While this new feature is helpful in many cases, you’ll prefer to create own workflows and connected blocks.

Thankfully, this is now a lot simpler to do.

Let’s assume that you want to grab the audio coming from your Mac’s microphone. To do so you’d drag the Input Device block on to the work area and to complete the workflow you’d drag in a Recorder element from the Outputs box. Once they’re connected, click the Record button to start, and the recording begins. The faint path between these two elements lights up and indicates the movement of signal from left t o right. Say, you want to record audio from an app. That’s not very different. Choose an Application element, pick the app you’d like to grab audio from and add in a Recorder element.

It’s flexibility that matters the most

This software lets you tamper with audio before it’s recorded. Let’s say that you’d like to digitize your old collection with all those sounds and noises filtered out. Inserting Declick effect could help achieve desired results. Rather you have a microphone that records just on the left and you’d want it to be mono across both right and left channels. Add in a Channels effect right after the Input Device element and pick its Mono option. Most importantly, the workflow session allows you to pick more than one source and one destination.  Another cool thing about Audio Hijack is its scheduling feature. You might use this component to say record an Internet podcast at the same time each day or week.

While the latest version certainly lets you do better things than before, the main motto of this release is about making current feature fairly easier to use- to the extent where you get more audio recorded. If you have overlooked Audio Hijack for its not-so-inviting user interface, it’s time you took a look at what’s in store for you with Audio Hijack version 3.0.