Robot Nurses: The future of hospitals and strip clubs 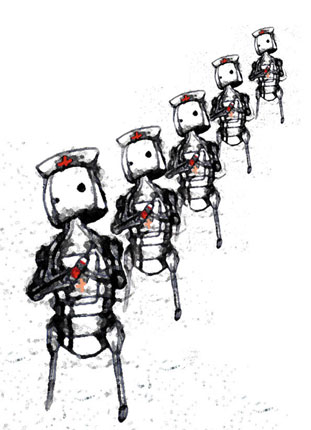 Hospitals have become plagued with staff shortages, which results in more work for the current staff, and longer waits for us patients. Scientists think that the future of medicine lies in the hands of robotics. Prototypes have already been used in hospitals, but soon the technology community sees robotics taking even a stronger hand in medicine…with robotic nurses.

The IWARD project goal is to have three working prototypes by 2010 of different robots designated to different nursing responsibilities. These “nurbots”, as we like to call them, will be able to mop floors better then custodians, talk to patients better then staff priests, and guide visitors to rooms better then annoying reception ladies and huge slightly smelly security guards.

Eventually the plan is to have a fully integrated information system with guide points. Producing an intelligence system which would make the entire hospital an interactive part of the system. Even though these nurbots are not designed to take the place of nurses, but are actually supposed to let the staff spend more time with the patient, we see more robots being used in the future.

With the thought of robotic nurses comes the inevitable question that everyone wants to ask. Are they anatomically correct? And if so, where can we get one? Ok…despite our seemingly perverted and warped view, convictions of robotic rape are just bound to show up eventually. And it’s just a really eerie thought. — Andrew Dobrow