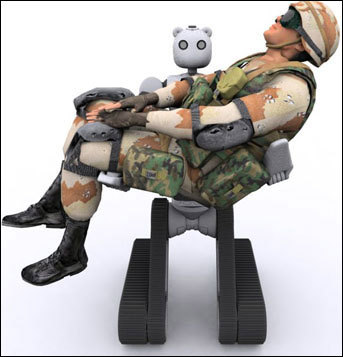 Marriage is a beautiful thing. Especially between a robot and a man. And even more especially when the robot is carrying the man soldier bride? Ok, well we tried to make this image funny, but in all seriousness, it’s great to see a robot in action, rather than lifting human sized bags of sand dummies.

This particular robot, named Bear, apparently for its teddy bear-like appearance, is a 6 foot tall rescue bot which is yet another addition to the U.S. military faction of bot slaves.   Oh, and Bear stands for “Battlefield Extraction-Assist Robot”. Catchy, ain’t it? — Andrew Dobrow