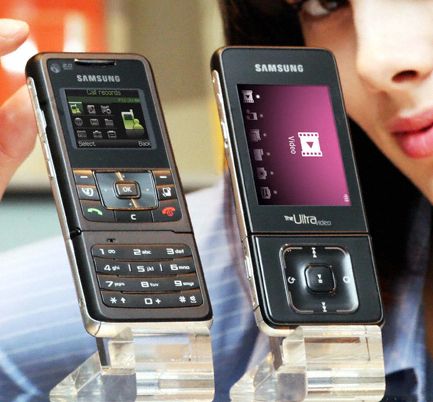 When Samsung announced the F300 and F500 at ITU Telecom World show, the company purposefully hid the backside of these phones. The design of the F300 ultra music phone was eventually revealed from FCC documents, leaked user manuals as well as blatant reviews of the prototypes. However the design of the backside of F500 ultra video phone was left in mystery, people even speculated that they should look the same, i.e. the same pathetically tiny color screen that can show up to 2 lines of text only. The pictures came out today proved it wrong. In fact, the backside of the F500 consists of a large enough color screen that can display the usual 3×3 main menu of Samsung. Our guess is that this would be a 220 by 176 screen similar (smaller) to that found on the ultra 6.9 X820 phone. The F300 and F500 will be on display at the CES this week. — Sam Chan