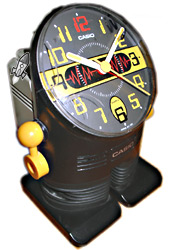 In the 80’s, Casio was the king of campy gadgets that they knew would make us look back from the future to giggle and prod at. The Casio Robot Alarm Clock doesn’t fail in that venture either.

The stumpy, and almost awkwardly heavy-looking Robot Alarm Clock would of thrilled any child of the 80’s, both then and now. But what would a child of the present say? “Why doesn’t the chart in the middle mooooove? Where are the blinking numbers? What’s this talk about a clock having arms and a face?”

It’s sad, but true. Children have become so accustomed to the typical digital read-out that we’re afraid most wouldn’t be able to tell the time on an average everyday analog clock. And schools aren’t doing much to keep our children informed about our time-telling past. Is this what the future has come to? Forgetting everything that has led up to now?

Ok, so we might be taking this a little to far. The nostalgia of seeing this Casio Robot clock just has a way of playing with our heart strings more then any drama movie or digital clock ever could. Eh, the robot looks stupid anyway. Maybe the 80’s weren’t the fabulous times we remember. — Andrew Dobrow