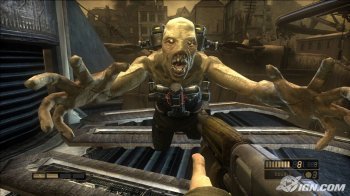 So the XBox 360 got their Gears of War, the Wii got its Zelda, and the PS3 got its Resistance: Fall of Man. These are the major three launch titles (excluding the 360) for the “next-gen” consoles that aren’t so next-gen anymore. Resistance:Fall of Man willreceive an update very soon and we have just been informed some of what that update will do. The update will fix some minor problems with the humongousmultiplayer mode that Resistance offers online player. Humongous=40 players. It will better balance the offerings of weapons and in turn make themultiplay gameplay more reliant on team strategy rather than n00b spraying (which we all hate). This information was received from Eric Ellis, lead multiplayer programmer from Insomniac.

I can’t yet talk about all the things we’ve changed, but I really think that people will be very pleased to see how responsive this is to some concerns that have come out since we went live. We’ve addressed a few key balance issues and put a big focus on making it possible to more effectively use a variety of strategic and team-based tactics in the game. I’m very excited to see how people like the change when it releases. That should happen very soon, so stay tuned.
-Eric Ellis