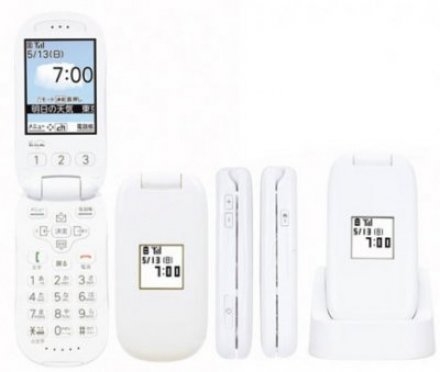 This new NTT DoCoMo product straight from the Japanese grapevine is specially made for the needs of senior citizens, while still looking pretty cool. Other models have been released in the aim for seniors, and although successful and useful, have been rather dull. The Raku-Raku Phone basic, designed by Kenya Hara brings modern style with modern tech illiteracy.

One of the coolest features that the Raku Raku will have is a “Slow Voice” feature, which surprisingly enough, slows down the communicated voice for easier listening. Also, there is the “Clear Voice” noise detection, which adjusts earpiece and ringtone volume depending on the surrounding noise levels. An automated voice is available to read on-screen text and names of incoming callers, along with the slightly odd edition of a pedometer.

Though there is no camera, the Raku Raku has a staggering standby time of 560 hours (in case of a spat of senile misplacement). The phone will be available in April for around Ą20,000. — Andrew Dobrow