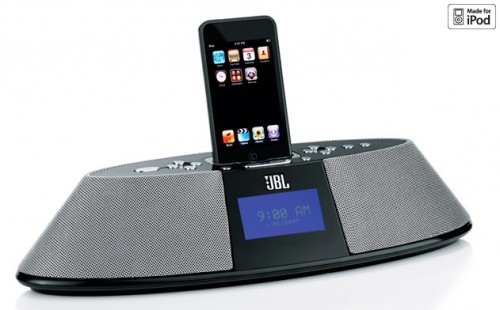 Several weeks ago, I received a JBL On Time 400 iHD iPod Dock (whew!) to review. In the past, I’ve really enjoyed JBL’s products. They make fair-priced, great-sounding iPod docks with rich bass and decent treble and mids. I unpacked the On Time, plugged it in and shoved my iPod Touch on top to start streaming music to the speakers. Unfortunately, the iPhone 3G doesn’t work with the On Time. This is a huge issue considering that a lot of iPod users have migrated to an iPhone, myself included since losing my iPod Touch in a drunken stupor.

But enough about drunken stupors. How easy is the On Time 400 iHD to use? It’s decent, but JBL hasn’t really upgraded its docking menu for years now. It’s still a two-color display reminiscent of an Apple II from the 1980s. It doesn’t give off a feeling of prestige and is really an eyesore to behold. Luckily, a remote is included with basic functionality, allowing you to avoid using the menu. Setting the clock and alarm is a breeze, ensuring you can replace your shitty alarm clock with the On Time.

Unfortunately, the sound on the On Time is less than desirable. I spent two hours playing various rock songs and dance music. Specifically, I threw on Metro Area’s Fabric 43 mix CD for an hour to get an overall feel for the system. Bass is muddy and distorted at high volumes. There is no “oomph” so to speak but instead a flat, dull pop from the kick drums. Highs were OK while mids seemed washed out. Listening to FM radio is easier on the ears considering how low-quality the audio is. But as I said, this is not a serious dock for listening to music. While it can do HD radio, the speakers the On Time is equipped with are merely lackluster at best.

The JBL On Time 400 iHD dock retails between $190 and $250. At that price, you are better off checking out some of JBL’s other products that have gotten better reviews or a Bose SoundDock. Better yet, pick up a small stereo system from Best Buy with iPod connectivity and you’re set. While the On Time is a great idea in concept, the product execution leaves much to be desired.