Princeton i-Bird falls in with the rest of the flock 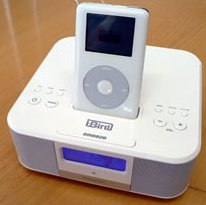 Now that Macworld is over and done with, you’d think that the iPod accessory market would slow down. All the vendors released last week, right? Guess not, because Princeton Corp. has just released its i-Bird iPod dock. The i-Bird has an iPod dock, AM/FM radio, and an integrated alarm clock. As for its sound output, it has two 3W speakers with a 8W subwoofer to bump out the bass. In case you were wondering, there isn’t much explanation as to why it is called an i-Bird. Its probably just another company riding the current trend of “i-insert animal name here” for anything remotely iPod related. One nice feature that not all other clock/dock have is the ability to connect to iTunes and sync via a USB cable. The i-Bird measures 180x170x61mm and weighs in at 738 grams. With a price tag of about $105, there are better places to put your money. — Nik Gomez