While the original Pleo might have been a dinosaur in sheep’s clothing, Innvo has decided to give the beloved dinobot another chance with Pleo Reborn. Far from heading towards extinction, the Reborn adds a heap of new features and upgrades which could potentially make Pleo a viable gift option for this year’s holiday season.

While members of the PleoWorld newsletter will likely be able to purchase Pleo Reborn sometime later this month, no official pricing has been released, but you can expect something in the $500 range. Think that’s a tad overpriced? Think again. Check out these awesome new features according to Innvo Lab CEO Derek Dotson:

-Pleos are now male or female (blue or pink), and will react to each other accordingly: females make gentle noises at each other, males step back and shout at each other, and a male and female will make noises and lean against each other¨.

-Pleo skin coloring will be randomized slightly, so that two Pleos produced at the same time will look distinctive. There will also be 10 different eye colors.

-Pleo will have a ’seed’ personality from the factory. Some will learn faster than others, and some will tend to be happier (or more mopey).

-Pleo now knows what time it is and will alter its behaviors accordingly; for example, it will want to be fed in the afternoon and act sleepy in the evening.

-Pleo now has voice recognition, and you can name it, and it will respond to that name… As long as it’s you saying it, not anyone else.

-By combining RFID tags that instruct Pleo to perform specific behaviors with voice recognition, it’s now possible to train Pleo to respond to different commands, such as “bow” or “come to me”.

-Many more touch sensors have been added, along with corresponding behaviors. For example, if you pet Pleo’s side, it will lean into you.

-Pleo now has a G sensor that lets it detect acceleration and impacts as well as touch.

-Motor speed and response have been improved, especially in the tail, head, and neck.

Pleo needs to be fed now. If you don’t kind of take care of your Pleo, eventually it will get sick. It will cough, get lethargic, and all that. It needs it’s food to keep it healthy. And if it falls, here’s a big thing, Pleo actually feels pain now. So, if you abuse your Pleo or drop it, remember he knows if he’s been dropped or violated, he feels pain. It takes him a while to recover. He’ll limp. If you touch the area, it’ll be sore and he’ll cry. There are medicines that come with Pleo. You give him these medicines and it helps with the healing process. So, love and affection, a little healing foods, will get Pleo back up. In the labs, we’re striving to make this a pet. Along with a pet, there are certain obligations. So, if you’ve got children who want to pet, this is a good training device. If you can keep Pleo healthy, you can more likely keep a real pet healthy.

Now, here’s one of the quirkiest things we’ve done. Pleo can sense temperature. This is kind of a cool feature. So, let’s say you’re traveling, and you’ve got Pleo in the car and it drops below a certain temperature, and I’m not gonna give the temperature now because it’s adjustable, Pleo starts to shiver and shake like he’s cold. And if you leave him too cold too long, he’ll catch a cold. he also senses heat. If it’s too hot for Pleo, he’ll start panting. Along with what you get right off the get-go is a little chunk of ice. You put it under his chin. If he’s hot, he’ll open his mouth. You put it in, he’ll chew on this ice. It cools him down. Like I said, in our strive to make Pleo a more realistic pet, he has to interact better with his environment. 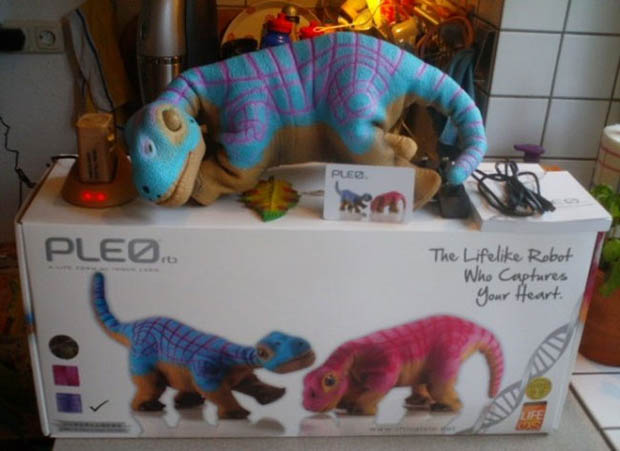