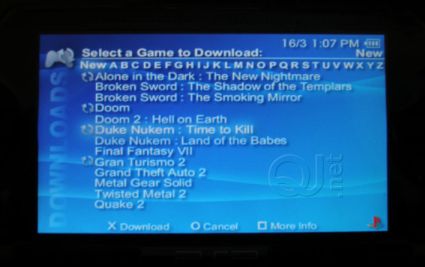 With PS3 riots still running wild, Sony has officially released downloads of PS1 games for the PSP. While this new addition to the Playstation brand won’t cause the need for riot police like other past launches, the integration of all of the Playstation consoles is proving itself to be a very impressive and smooth integration, aside from a few snags on the line with the PS3. The games are only downloadable through the PS3 system and only playable on the PSP. As of now there is only 5 games available (Cool Boarders, Crash Bandicoot, Hot Shots Golf 2, Syphon Filter,and Tekken 2). For a price of (cheap!) $6 (for children, thats one bill with the skinny guy with a beard, and one of the bills with the guy with white hair) you could do much worse.

The release of these classic titles will be a nice chance for the older gamer to re-live the golden era of Playstation. More titles are expected by the end of the month and will be gradually updated during the year (please Resident Evil, please Metal Gear Solid, please Twisted Metal, maybe even Gran Turismo or FFVII? Just please no Spawn). The games released are pretty much quick pick up games that don’t necessarily have to be saved unless you’re super compulsive about finishing a round. Playstation says that downloadable games for PSP is just the beginning. Mmmm….tech-a-licious. — Andrew Dobrow