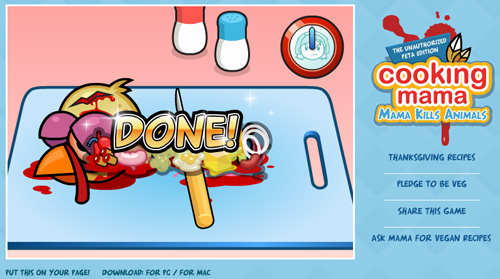 Anyone who has ever played Cooking Mama knows what a sweet heart the protagonist, Mama, is. PETA, on the other hand, has a different take on Majesco’s cooking franchise for the Nintendo Wii and DS. To PETA, Mama is an evil witch hellbent on killing innocent turkeys for this upcoming Thanksgiving.

In this Flash game, you’ll go through each preparation of the turkey, from plucking its feathers to stuffing it. At the end of each level you’ll be rewarded with a PETA fact that’ll have you feeling bad about cooking turkey. That, or it will just make you want to cook more turkeys. The game is twisted, but very well done. It’s up there with Super Obama World.